With no public transportation available, nearly out of Kyrgyz Som and with no Kazakh Tenge, I’d decided to head to Karakol first to inquire about how to get to Kazakhstan from the Eastern Pass. After meeting Tom, who was headed to highly-recommended Tosor, I scrapped the inquiry part and headed with him to Tosor via Marshrutka. An excellent decision.

As I’ve gotten older in traveler years, I’ve become more and more averse to moving about rapidly and less and less interested in seeingthings, preferring instead to stay in a place for longer and simply relax and chat with people. So when we arrived at Eldos-Ata Eco Hotel, I edited my one night stay plan as I spoke to the proprietress to two nights. Down at 1600m, a full 600m lower than Жыргалан, it was beautifully warm weather (if rather dry) by Issyk-Kul. The hotel/resort is a mere 400m away from the lake, which I had seen from the Marshrutka rides and peaks and hadn’t thought much of. It’s the equivalent of the ocean for this landlocked country, and I’d figured it wouldn’t be of much interest to a Floridian.

The water was lovely, though, and exactly the right temperature after the Marshrutkas. Unlike Baikal to the North, the water remained pure and clear, with no pollution-indicating-algae lapping against the shores. The massive lake deepened very gently from the shore at Tosor, with Tom remarking how quickly it got colder as we waded away from the shore. Quite pleasant when the water came to his waist (my chest) and rather frigid when above my shoulders (at his chest). We swam for some time, then sat to read/draw as we dried off. As always, my drawing drew a small crowd, and I happily pointed out the figures of the kids to them, as I’d just happened to draw them, too. 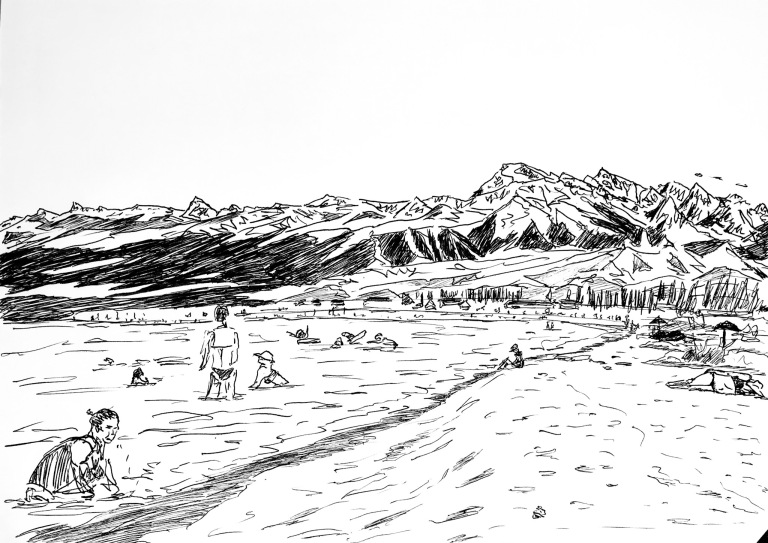 Hanging out with Tom was lovely and slightly echo-chambery. He and I both traveled extensively, to similar countries and on similar timeframes. We think similarly about how to spend time and enjoy traveling (it’s fine to miss things, it’s great to do nothing, it’s nice to just show up rather than reserve accommodation, hikes are nice but hard and mountains are to be respected, etc.). He’s a climber, too, and we even have similar political bents (though he’s a bit more mainstreamishly liberal than I). He lives at home with his mother, works a set of jobs he’s passionate about – an NGO focusing on the health infrastructure around landmine clearance, a hiking company, and another I forget the particulars of – studied politics, corruption, and nationalism in Central Asia, and is generally a bizarro universe me – 6’3″, rather light skinned, balding (he made his peace with that), British with a wonderfully posh accent. We talked most of the time we spent together, and didn’t seem to tire of each other’s company. As with Douglas, we could easily walk away and be alone or put our heads down to write without worrying about offending the other. I greatly appreciated our conversations – starting with a bang right away in our first night in the yurt in Жыргалан with our thoughts on the nationalizing of Kyrgyzstan.

After nearly a month of almost universally positive experiences (the exceptions being the price of the shirdag, the hitch/taxi in Karakol, and being bed-ridden ill) the honeymoon period must have been up. Either that or drivers all around the world have a tendency to be terrible people. I headed to “Fairytale” Canyon against my better judgement on my second day in Tosor, feeling antsy and wanting to do something despite knowing – as I wrote above – the value of not doing anything and not seeing things. The canyon was quite underwhelming and precisely what I expected – a well marketed tourist spot that most tourists ooh and aah and take photos at because they’re told to, chosen due to accessibility off the main drag. It began to thunder and then rain lightly after less than an hour there (where I serendipitously met Бактыбек from my homestay in Bishkek), so I left after two quick drawings. 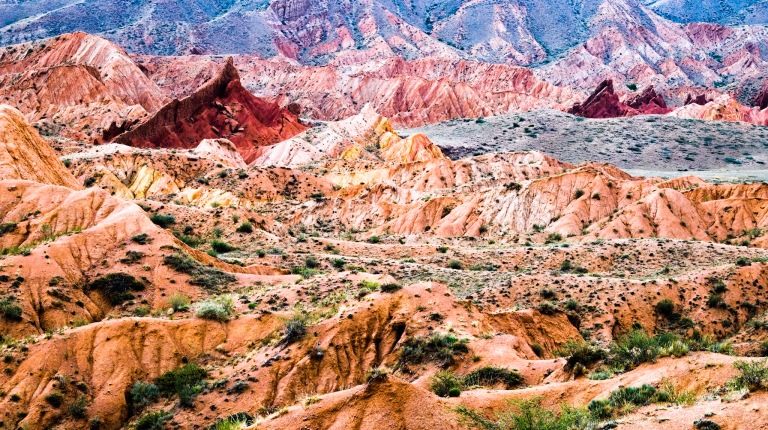 The marshrutka driver I flagged down nodded slightly when I asked to go to Barskoon, motioning me to get in and close the door. I handed him fifty som, expecting twenty som in return as confirmed by the hotel owner’s father, the guard at the park gate (a shifty enterprise in itself), and a man in the marshrutka itself. He didn’t give me change, and didn’t stop at either entrance to Barskoon valley, so I asked him to stop, please, at the final bus stop anywhere near the valley. I asked, politely, that it was thirty som right? I think I gave you fifty som. He stared at me, clearly angry, then after a beat, said “чо, не хочешь?” (What, you don’t want?), then sped off with the door still open, not giving me a chance to disembark. Shocked, I looked around for help. No one helped me. I had to wait until Ak-Terek, 18 kilometers further on, before someone else got off (someone the driver asked ahead of time to confirm the specific location, quite the marked difference). I got off, frustratedly told the dead-silent Marshrutka “Before I said Kyrgyzstan was my favorite country. After today, I won’t.”, crossed the street, and flagged another Marshrutka back to Tosor to calm down, giving up on Barskoon, rationalizing that it likely wouldn’t be terribly fun under a thunderstorm anyways.

I met a very interesting professional photographer on the beach that night, twice, and mined him for lots of inspiration for projects for my Advanced Photography class. At first I listened to him go on about the merits of photography without revealing that I teach the subject. The second time, I got to see his rather basic camera setup – a Nikon D5000 series (an entry level camera) with a prime 50mm f/1.8 lens – a rather inexpensive nifty fifty. I’m looking forward to showing my students the amazing photographs he takes in spite of (or rather completely unrelated to) his setup, essentially the same setup as the Canon SL1 with 35mm f/2.0 setup that I start my own students on.

Dinners were excellent in the Hotel, with exactly the right amount of guests for the lush wood and vine terrace – a fascinating German family of clearly different ethnicities, two Kazakh family with adorable daughters, a set of bikers from the Netherlands/Belgium on a six month motorcycle ride loop from the E.U. to Mongolia and back, and us, the odd couple. On entering the premises, actually, a deaf/mute Kyrgyz quickly signed his disability, then followed it up with the most direct “are you lovers?” set of hand gestures we’d ever seen – he pointed at the both of us, made a heart with his hands, then cocked his head with a quizzical look. When we shook our heads, he mimed pulling someone close by the shoulder as a friend.

All these guests were friendly and lovely. Then there were the Israelis. Their reputation for being terrible tourists precedes them, and I’ve certainly been preconditioned to be badly disposed towards them from my time in Patagonia. These were no different (or my confirmation bias was too blinding) – giving intense unfriendly glares at the other guests, as if we were intruding upon their home, eating their own meals of various mezze and taking up the entire carpeted area to the South of the main guest building, talking loudly late into the night as if they were the only guests, etc. Nothing truly terrible, but certainly rude.

In contrast, the Kazakhs next door (or Russians, or Kazakh Russians, whatever your preference of defining people via nationalities or states or nation-states or ethnicities or what have you) were extremely friendly. The seven year old daughter, Маша, was extremely sweet and her mother had quite the hands off attitude, very trusting and chill, in letting her play with the two grown men next door. Masha showed us her drawings, requested flights (being lifted into the air – surprisingly easy, she’s absurdly light), and generally chatted happily with us both nights. On our final morning, she gave me a big hug (around my legs) and a tearful face, and asked when I’d visit them in Kazakhstan. I think that’s the image I’ll remember the most of Issyk-Kul – the lake with the mountains all around to be sure, but possibly before that the adorable Russian Kazakh girl cradling a tinier kitten in her arms.