I transferred over to Daria and Maria’s flat last night to flee the chalk to great results. I felt instantly better this morning (7.27.10). As is my wont, I sought out the library and spent quite awhile there, blogging, etc. Unfortunately, I stayed for the dry bits of the day and emerged just as it began to rain – which put rather a damper on my plans to busk outside. I hid inside a little longer, which resulted in a strange meeting. I tend to take advantage of libraries not just for their free books and internet but also their generally clean and free bathrooms. I was quite disappointed when I walked into the Frederiksberg Library bathroom, then, and my nose was assaulted with an exceedingly foul smell. After a while, though, it became clear that the smell came from a single patron – a man who shook my hand and talked with me for a bit in Danish (I understood like 3 words) and seemed just as aware of his smell – he was scrubbing away at his face and arms and hands with the paper towels and soap (with no smellable results) but I appreciated the effort.

There’s a mall close to the Frederiksberg Library and after a few minutes milling around aimlessly inside I worked up the courage to ask if I could play in the Mall. The girls at the Information desk told me I wasn’t allowed to, or even directly outside (under the awning) so I decided to try the adjoining Metro station. Most Metros in København are designed expressly against hang out spaces but the Frederiksberg one has a small antechamber which I decided to exploit. 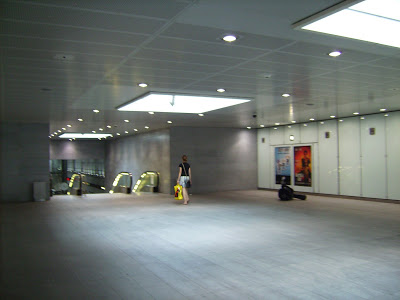 My stuff posing at the Metro

Unfortunately the absurd efficiency of Danish transport defeated my busking designs. I played the standard speculative fifteen minutes (with the decidedly appropriate Sound of Silence to close it out) to no tips. Most people looked at me rather strangely, as if I was crazy to try busking there, what with Metros coming each direction every twenty minutes and the coldness of the grey surroundings and greyer sky. When I returned to take the photo I noticed an automated message at the entrance in Danish and in an English accent “We advise all passengers to be aware of pickpockets.”… which certainly didn’t further my cause.

The rain let up so I discretely hopped the metro and walked to Blågårdsgade. The sky remained cloudy but it looked at first to be a great pitch. An Arab guy sitting nearby lit up immediately when I opened my case, saying “God, Musik!” enthusiastically, smiling broadly and chatting animatedly with his friends. He tossed me a twenty crown coin and stayed the whole pitch.

Unfortunately that would prove to be half the earnings for the day. Halfway through my eyes and mind wandered to the nearby café where I noticed the cost of a beer. At around thirty crowns, a single person foregoing a beer would do wonders for me. I’ll spare you the rant I formulated then. The same black boy on the bike who circled around a few days ago did so again this time and near the end he stopped directly in front of my case with two 50 øre coins he’d found somewhere helped immensely – exactly the parable of the poor widow (well, had they been drachma, but the right color at least).

There were a few older men at the café who particularly enjoyed my music. The first nodded his head in time behind his dark shades for a while, smiling encouraging at me. He tipped me after a while and told me to turn so that I faced the café goers rather than the street itself. As I started Better Together he clapped along. Not long after the other man – bald, large around the middle, greying hair – tossed me a small tip, apologizing in Danish that he had little. He shook my hand at the end of the pitch, probably offering Danish words of encouragement but I don’t remember hearing any sound at all – I was so depressed at this point that I felt near tears from despair.