I’d heard busking was heavily policed in Wien so I didn’t have high hopes. Well, even those low expectations were exceeded by reality. My first full day in Wien I spent just wandering around. I started by going straight to the “tiny office in the middle of nowhere where nobody works” described to me on an internet forum – MA 36 on Dresdner Straße to obtain a permit. This was yesterday (8.4.10). Turns out they only give out permits on the last day of the previous month, and they only have very very few of them. The man working the desk gave me a slip of paper detailing approved pitches and another with rules – all in german, of course – and shooed me away.

Let me describe the situation a bit more. There are 36 official locations one can play in without a permit strewn all around the city of Wien. Now, this is a very deceptive number, as half of them lie quite a ways out from the center in… sparsely populated areas. As a Wien newspaper put it, this absurd legislation pushes buskers to places which suck and where no one wants to listen. Being the good law-abiding human I am (sorta) I set out today to look at these pitches. I’d checked out a few of the parks the previous day on my normal day-one-in-a-city walk around everything and they sucked. No one there. Below are the pitches as I found them interspersed with places one isn’t allowed to play.

Am Hof, “coincidentally” the approved square was occupied by some large tent and frequented by no people.

Essentially they relegate musicians to large open spaces or at extremely noisy crossroads. I didn’t even bother taking photos of some. And yes, they specify to a crazy extent: “the concrete spot 25m from the intersection of…” “In the center of Südtiroler Platz (which is a huge cross roads and there’s but a tiny patch of concrete in the middle).

Such a shame. Such a waste. As I walked about the main pedestrian area near Stefansdom in search of a post office past tons of tourists the whole place just felt wrong. Silent. Isn’t Wien supposed to be capital of music? There were some buskers out, but aside from a horrid trio (violin, harp, flute) playing thin and reedy watered down versions of classic pop they were all silent. The statues even looked depressed out there. I considered busking anyways but only for a second because I passed a policeman literally every two minutes. Just for the record, the fine is €250 and very happily enforced so I’ve read. Not worth it. So as I left the visually stunning city center I thought to myself “What is the sound of oppression? Silence.”

One approved location is Karlsplatz. Two buskers were already there and… they sucked and were loud. Pedestrian flow is minimal and there’s no obvious circulation but many, many paths around the fountain specified. I stayed a moment then moved on to another sanctioned place – a pedestrian section of Akademiestraße – they specified the front of a mall. After a few songs there, singing for the predicably haughty rich patrons of the ritzy Louis Vuitton graced mall who look at you like you’re some stubborn piece of dirt on their immaculate shoes, a security worker told me I couldn’t play there. Naturally I protested, explaining this was a specified location. He was kind enough to let me play a little longer while he asked inside.

When he returned with another security guard they let me finish what I thought was a very appropriate Sound of Silence (one guard wore a wry smile) before explaining I couldn’t play because it’s a private establishment. So essentially the city approves a patch of land but it’s up to the owners of that land if I can play. Clever. I had some sympathy from the guards, however, who coincidentally were Chinese americans from San Diego and also musicians – they kindly referred me back to the park. I returned there but the crappy guitarist was still playing to his backing tracks. I offered to play the background chords for him but he gave me a frosty glare. The accordionist took a break but the place looked like crap. 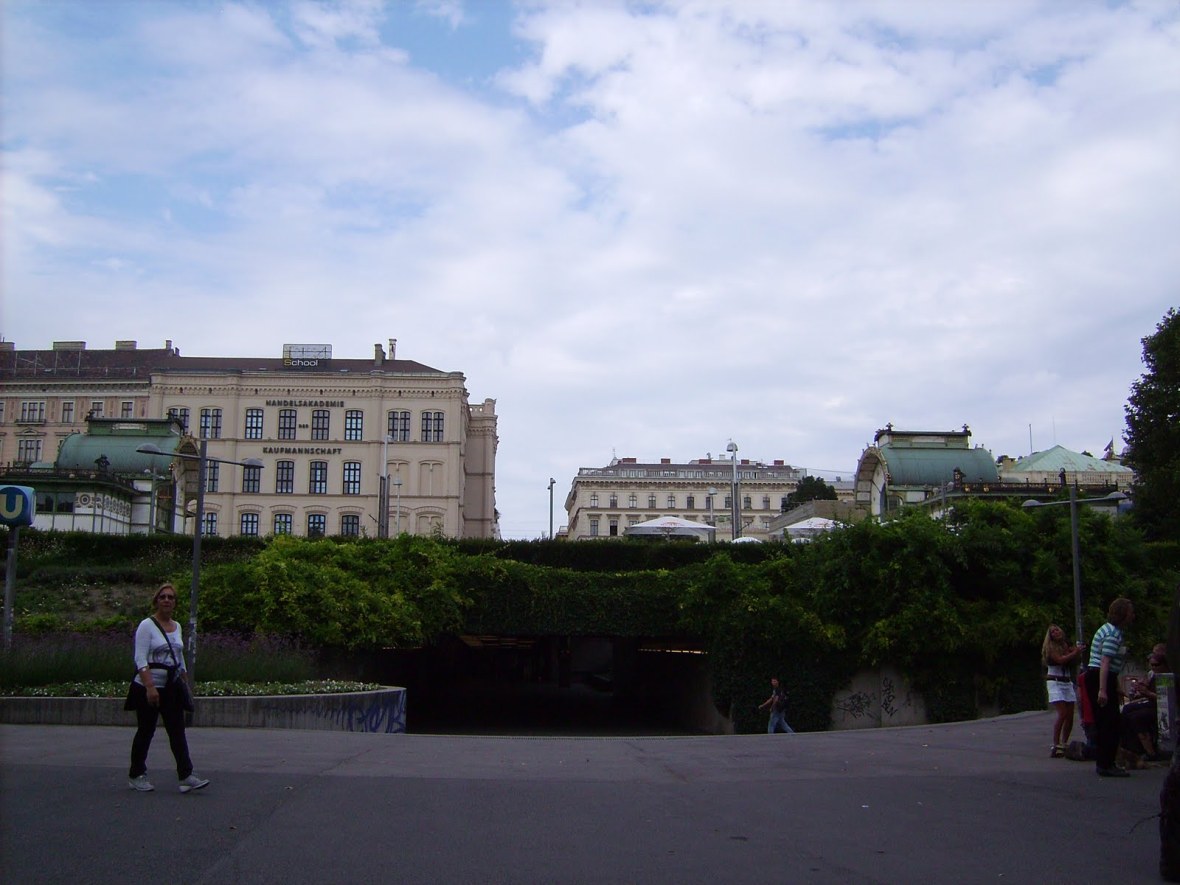 So I continued on. To fail pitch after fail pitch.

Finally, I got to MariaHilfer Straße, the main stropping drag in Wien. I ducked into a World Music shop to look for a journal for Geoffrey and chanced upon a very friendly shop worker, who lamented with me the state of busking in Wien and the irony of the situation. There used to be a busker every eight meters on Graben or on MariaHilfer, each playing something different, most good, and it was so nice – but recently the rich people think this bothers them (the proles need to know their place) and thus.. silence. He recommended I try to find a spot further away from the shops because the shops call in the police sometimes.

I walked up to the official spot on MariaHilfer – yet another crossroads and easily the loudest part of the street (incidentally a Lawrence Wiener stood proud on a nearby water tower), where my sound would be swallowed up. I’d passed a perfect sidestreet earlier, and decided oh screw it, I’ll play there. It sort of fits the specification if you dont read German so well (it’s between the specified streets, for instance).

The pitch, a spot at the side of a church on a narrow pedestrian street, started slow but picked up as I veered towards playing happier fare. I got my first tip with Mrs. Robinson and never turned back from the fast happy, basically exhausting my repertoire of happy music in the following forty minutes. The people were lovely – starved for music I can imagine – and really warmed to me with Stand By Me. Passersby stopped and looked for change near me. No one stopped for longer than that, but I very much appreciated they paused at all. All my tippers were women. First a smiling thirty somnething. Then a mother with a young child, then a pair of high schoolers, then an elderly lady, the female half of a young couple, a middle aged lady… No police passed me and the white walls around, initially cold and cloistering began to feel like a wonderfully warm expanse.